Philip Mayerson, Professor Emeritus of Classics at New York University, was born on May 20, 1918, and died on April 13, 2016, just a month short of his 98th birthday. The youngest of four children of immigrant parents in Brooklyn, Mayerson attended public schools there and then worked as a bookkeeper while studying part-time at Brooklyn College. During World War II he served in the U.S. Navy in the South Pacific; like many veterans of that war, he did not care to talk about his experiences in later years. After the war, he attended New York University on the G.I. bill. He spent his entire postwar career at NYU, where he received his A.B. in 1947 and his Ph.D. in 1956, and taught for forty years, rising through the ranks from Instructor to Professor and retiring in 1988. He also served the university as Vice Dean, Acting Dean, and then Dean of Washington Square and University College (Dean 1973-1978), altogether dedicating nearly a decade to administration during some of the most difficult years in the university’s history.

His life-long interest in the agricultural life of southern Palestine was already the focus of his dissertation, “Arid zone farming in antiquity: a study of ancient agricultural and related hydrological practices in southern Palestine.” Just after receiving his doctorate, Mayerson spent a year in Jerusalem as visiting scholar at the Hebrew University, with the assistance of a grant from the Rockefeller Foundation. In the fall of 1957 he married Ann Barkow, with whom he had two daughters, Miriam and Clare, who survive him. (I am indebted to Miriam Mayerson for much of the information in this memorial.) A first article on the Negev appeared in BASOR 153 (1959), and after that a steady stream of publications on this domain established him as an expert on the region and on agriculture. Taking advantage of the material found by the Colt Expedition at Nessana, he published The Ancient Agricultural Regime of Nessana and the Central Negeb in 1961; this appeared also the following year in the first volume of Excavations at Nessana, drawing heavily on the papyri published in 1958 (P.Ness. 3 = Excavations at Nessana, vol. III) but also on the archaeological finds, including archaeobotanical remains. A leave in 1961-1962, soon after promotion to associate professor and also spent in Israel, was supported by a fellowship from the American Council of Learned Societies. In the 1960s and 1970s he taught on television for Sunrise Semester, an experience he seems to have enjoyed greatly.

Over the next three decades, Mayerson continued to publish on a wide gamut of aspects of the history, archaeology, geography, and texts of the region in late antiquity, ranging across literary, documentary, and legal sources. A relatively fallow period can be seen during his administrative years, which coincided in large part with the years after his wife’s death in 1971, leaving him with two children to raise. In 1976 he was remarried, to Joy Gottesman Ungerleider, and he spent a year as visiting professor at the Hebrew University (1978-1979) just after his service as dean ended. From this point, one sees a marked upswing in publication in the following years, during which he and Joy traveled frequently to Israel. Forty of his articles in this domain were collected in Monks, Martyrs, Soldiers and Saracens: Papers on the Near East in Late Antiquity (1962-1993), published by the Israel Exploration Society in association with NYU (Jerusalem 1994). Many of these articles are papyrological in character, mostly having appeared in ZPE. In the same year that the book appeared, Joy Ungerleider-Mayerson died.

By this point, Mayerson was 75 and had been retired for five years, but he went on to publish very actively over the next fifteen years or so, including in BASP, the most recent contribution here being a short article on the Pharanitai in BASP 47 (2010); he continued his scholarly work until his mid-90s, and only in his last decade did he reduce his frequent trips from Westchester into New York for his research. His later work is particularly devoted to measures, especially of wine, a subject long of interest to him and on which he contributed a section to the first volume of the publication of the excavations at Ashkelon (2008). The combination of papyrological and archaeological evidence visible in his early work remained a feature of his scholarship right to the end.
​
Through the Dorot Foundation, of which Joy Ungerleider-Mayerson was president, Mayerson was a generous supporter of the American Society of Papyrologists and its Bulletin.
Leslie S.b. Maccoull (1945-2015)

Dr. Leslie S.B. MacCoull, papyrologist, Byzantinist, and historian, died at her home in Tempe, Arizona, on August 26 at age 70. MacCoull was born in New London, Connecticut, on August 7, 1945, attended St. Mary's School in Peekskill, New York, and received her A.B. in Classics from Vassar College in 1965, summa cum laude, as class salutatorian; she had been elected to Phi Beta Kappa in her junior year. She received an M.A. in Classics in 1966 from Yale University and a Ph.D. from the Catholic University of America in Semitics in 1973 with a dissertation on Coptic papyri in the Freer Gallery of Art. She was a gifted linguist, with a command of ancient and modern languages.

After her doctorate, MacCoull served for three years at the Institute for Christian Oriental Research at the Catholid University before moving to Cairo, where she was first a fellow at the American Research Center in Egypt and then, from 1978 until 1984, director of studies and librarian at the Society for Coptic Archaeology and editor of its journal. In 1984 she returned to the United States, living in Washington D.C., and carrying out various editorial work for Dumbarton Oaks and the National Endowment for the Humanities. For the past twenty years she was an academic associate and editor for the Arizona Center for Medieval and Renaissance Studies, using her command of languages on a wide variety of topics.

Her scholarly output was prodigious, amounting to more than 300 books, articles, and reviews. She is no doubt most famous for her work in bringing back to prominence the archive of Dioscorus, the landowning notary of the Egyptian village of Aphrodito, especially its forgotten Coptic components. Her book, Dioscorus of Aphrodito (1988) was revolutionary for its day, an influential paradigm-shifter, treating Dioscorus not as a failed poet but as a shining representative of his "coruscating" age. Nevertheless, her work extended well beyond Dioscorus to the entire culture of the Late Antique world -- its religion, philosophy, and law. She contributed, for example, a cluster of noteworthy studies on the Alexandrian philosopher and theologian John Philoponus. Nearly fifty of her best-known articles, appearing first in a stunningly wide array of journals, are collected in Coptic Perspectives on Late Antiquity (1993) and Documenting Christianity in Egypt, Sixth to Fourteenth Centuries (2011). She recently added to her publications a volume of Coptic legal documents in translation and with commentary (2009) and co-edited a long Greek tax account in the British Library from the sixth century (2011). Her many editions of Coptic documentary texts and he enthusiastic articles about the wider significance of this material provided inspiration to new generations of scholars and contributed to the growth of Coptic papyrology in the past few decades. Much of her work was devoted, in some way, to the broadening of the scholarly understanding of the Late Antique period to include Coptic textual sources. It was her abiding conviction that Egypt was an integral component of the Late Antique Classical world and its Coptic culture an organic offshoot of Egyptian Hellenism. Her reviews are noteworthy for their perspicacity, generosity, and collegial good cheer. She was a true embodiment of the amicitia papyrologorum.

MacCoull had a wide variety of cultural interests, ranging from early and classical music (she was an accomplished soprano; her idol was Maria Callas) to pop culture (Batman, Star Trek, Jim Morrison, and the Doors); allusions to these interests are sprinkled through her elegant prose. Her many friends treasured the witty communications they received from her. She was a generous and inspirational mentor to many younger scholars, as on-line testimonials after her death quickly showed. She was many people's most unforgettable character.

MacCoull was twice married in her youth, but the love of her life was Mirrit Boutros Ghali, to whom, even long after his death, she dedicated each and every one of her scholarly achievements. She is survived by her half-siblings Robert, Kit, Pat, and Nick Bailey and BJ Glanville and Darcy Kulesha. 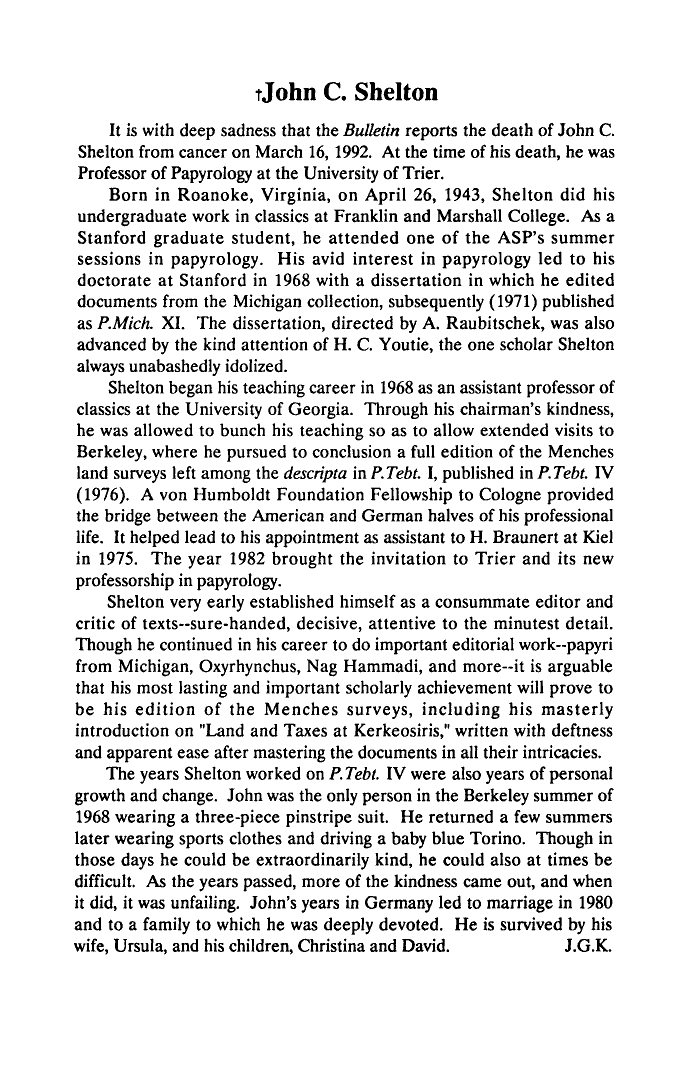 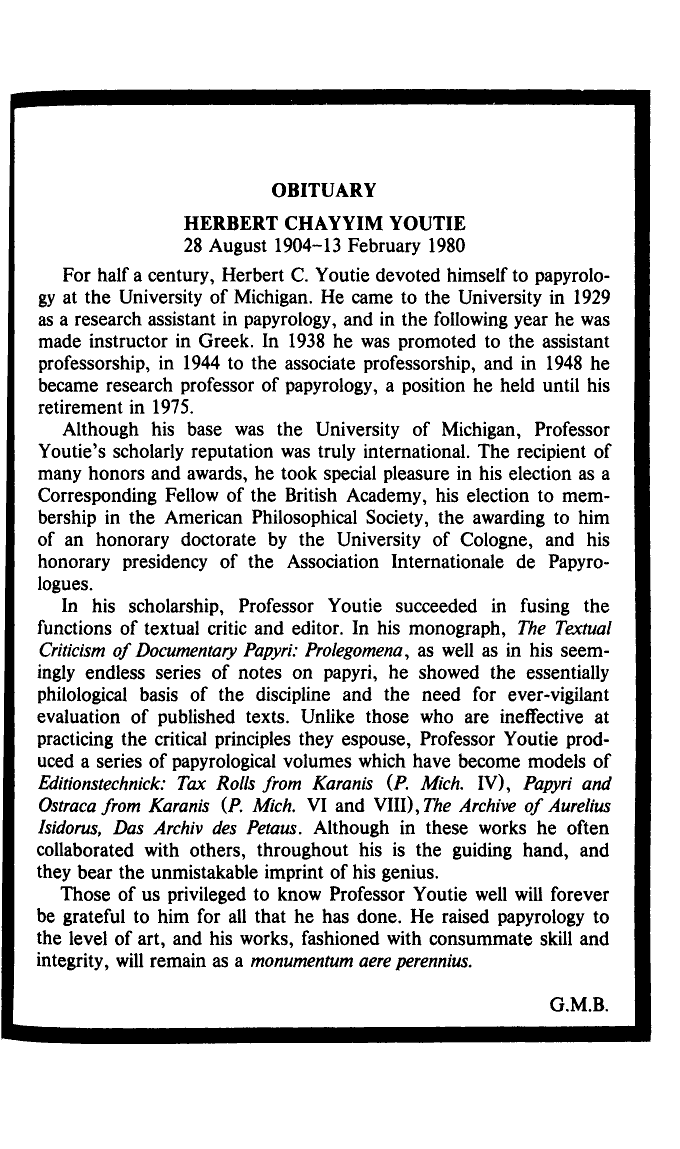